Top Cryptocurrencies You Can Stake: An In-Depth Guide

Let’s take a close look at everything you need to know about leading PoS cryptocurrencies you can start staking today. 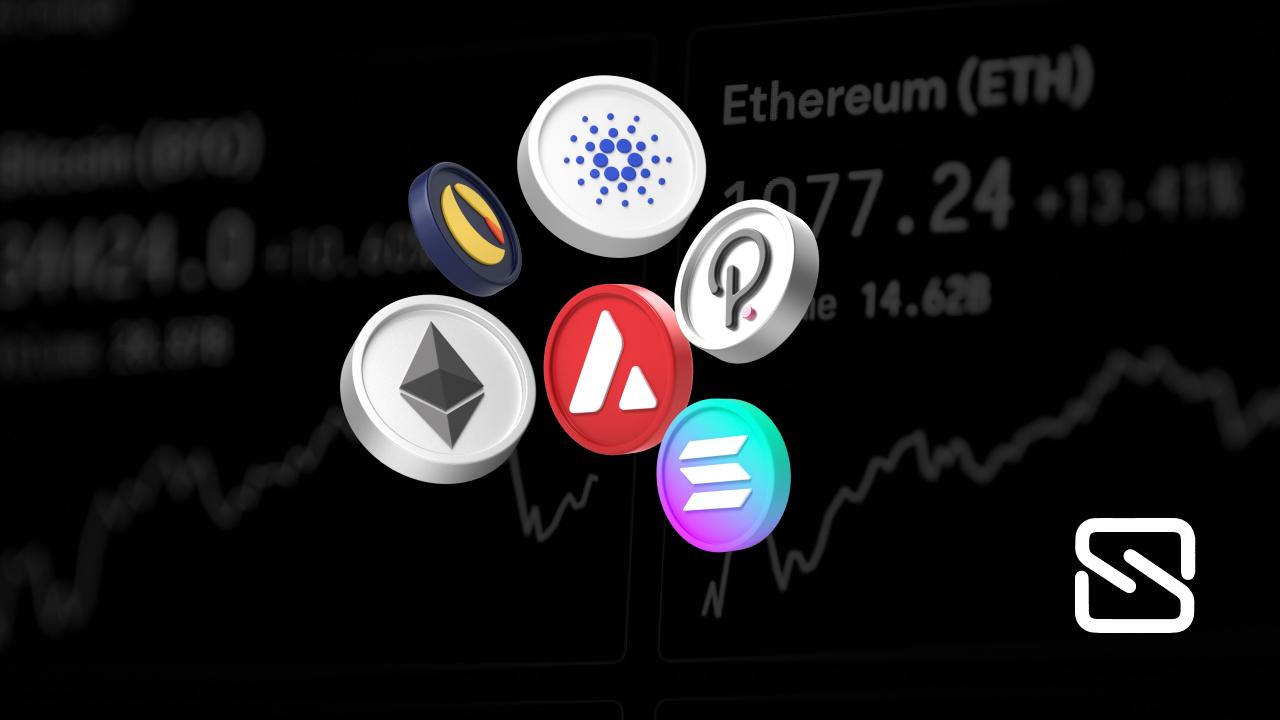 However, among all the razzmatazz, there is an aspect of crypto ownership that hasn’t gotten the attention it deserves: crypto staking. This is a way to earn yield from your holdings but only with certain cryptocurrencies. Knowing which ones might influence your purchasing decisions.

Let’s take a close look at everything you need to know about leading PoS cryptocurrencies you can start staking today.

SOLANA (SOL)
Do you want to use SOL Staking to earn Staking Rewards? Solana is a rapidly expanding “Ethereum killer” that is making waves this year, and staking your SOL early could result in some very big earnings.

Solana (SOL) is a decentralized application development platform based on the blockchain (dapps). The native SOL coin of Solana is a tradable token that can be used to perform on-chain transactions and pay network fees.

Validators must run and maintain a validation node (known as a “Cluster”), which necessitates regular uptime and hardware that meets certain specifications. Slashing is a technique used by Solana to prevent validators from acting maliciously or performing poorly. Validators can collect commission fees from delegators to help pay the costs of operating a cluster.

Because it uses a timestamping mechanism known as proof-of-history (PoH) consensus, Solana stands out among other noteworthy PoS blockchains. Solana achieves a block time of 400 milliseconds by mixing PoS and PoH. Cardano takes 20 seconds to generate a new block, while Ethereum takes 13 seconds. SOL’s annual inflation rate began at 8% but is now declining by 15% each year, eventually reaching 1.5 percent. Every epoch, SOL is awarded to delegated stakers and validators as part of Solana’s inflation schedule (two days).

How profitable is staking Solana (SOL)

Staking payouts for both validators and delegators are based on Solana’s modified staking yield. Staking incentives are dynamic and alter in relation to the quantity of tokens staked out of the total current supply of SOL under the staking dilution structure.

The current annual percentage yield (APY) for delegated staking is around 5.93 percent, according to Staking Rewards, with the majority of validators currently charging a 10% charge. You would earn around 59.3 SOL if you staked 1,000 SOL. Its current staked value is $34,292,911,39.

Ethereum 2.0 is a long-awaited upgrade to the Ethereum protocol that will see the switch from Proof of Work (PoW) to PoS as the consensus mechanism. Ethereum 2.0 will make mining available to ETH holders, among other benefits of the network upgrade, such as better transaction speeds.

To begin staking Ethereum, a validator must first deposit a minimum of 32 ETH into the official deposit contract address (see below). While Ethereum staking pools exist to allow you to stake without having to spend 32 ETH, Ethereum 2.0 does not allow delegation. In addition to the minimum ETH requirement, Ethereum staking necessitates the use of specialized software known as a node client to connect to the network and validate transactions on the blockchain.

Ethereum 2.0 will have a substantially reduced mining barrier to entry because of its switch to a PoS system. Before the update, mining required large upfront hardware costs. Prospective miners will no longer need to buy graphics cards or incur a high energy expense as a result of the move away from PoW.

Stake delegation and hosting a stake pool are two ways to gain staking incentives on Cardano. Stake delegation allows ADA holders to delegate their ADA to staking pools without requiring network connection or any required gear. Staking pools can be found via IOG’s Daedalus wallet or Emurgo’s Yoroi wallet for ADA holders wanting to stake their tokens.

Stake pool operators manage stake pools. Individuals who are capable of maintaining a network node’s uptime in order to keep the network secure. The Cardano network uses game theory to determine which stake pool will generate the next block on the chain, with the possibility of being chosen as a “slot leader” increasing as the total amount of ADA staked also increases. A reward is granted among stake delegators every time a pool is chosen as slot leader and validates a transaction block. Each epoch has 420,000 one-second “slots” and is separated into five-day chunks called “epochs.”

Staking rewards are awarded to stake delegators at the end of each epoch and are divided evenly depending on the delegator’s total ADA staked 25 days prior to the cycle’s completion. Staking ADA is achievable thanks to the Ouroboros proof-of-stake consensus method. It can handle roughly 250 transactions per second (tps), but IOG claims that their new Hydra layer-2 scaling protocol can increase that to one million.

Overall, Cardano staking can be very profitable for those who are able to run a staking pool and can keep pool-related fees well managed. It’s recommended users should check stake pools regularly and move funds around to ensure they are getting the best possible rates.

In general, staking Avalanche from a wallet works by delegating your tokens to validators who process transactions and run the network. Delegating a stake is a shared-risk shared-reward financial model that may provide returns to holders of tokens delegated for a long period. This is achieved by aligning the financial incentives of the token-holders (delegators) and the validators to whom they delegate.

Additionally, the returns or yield for staked tokens is based on the current inflation rate, the total number of AVAX staked on the network, and an individual validator’s uptime and commission (fee). Ultimately, no specific technical expertise or investment in costly hardware devices is needed. You just simply lock up your AVAX coins in a wallet and get rewarded while you sleep.

TERRA (LUNA)
Terra’s native cryptocurrency, LUNA, is an open-source, public blockchain platform that allows users to construct their own stablecoins tied to a variety of international fiat currencies, such as the US dollar (USD), Korean Ren (KRT), and euro (EUT). These stablecoins aren’t backed by fiat currencies; instead, they rely on algorithms and Terra’s LUNA token to keep their value stable.

The primary purpose of LUNA is to protect the network by locking value in the Terra ecosystem though a staking mechanism. Of course at the same time the holders of LUNA are exposing themselves to the price volatility risk of the LUNA token itself. Staking rewards for LUNA holders is a way to incentivize them to take on these risks and to hold LUNA long-term. Staking rewards are distributed first to network validators, who take a small commission for themselves before passing along the rewards to individual delegators. The size of those rewards are determined by the size of the stake. They also increase as the transaction volume in the network increases, since part of the staking rewards come from transaction fees.

Depending on whether you choose to run a validator or delegate your LUNA, staking rewards for Terra can vary. While running a validator is a bit more difficult than being a delegator, it can earn you up to 10% APY, which is 3% more than the APY for delegation.

POLKADOT (DOT)
Polkadot (DOT) is a blockchain interoperability protocol that unites many chains into a single network, allowing for simultaneous transaction processing and data exchanges between them. Polkadot’s native coin, DOT, is largely utilized for governance, staking, and connecting to new “parachains,” among other things.

Polkadot proposed a non-probability proof-of-stake (NPoS) consensus mechanism that allows users to earn staking rewards by validating or nominating. Validators are in charge of validating transactions on the Polkadot network, while nominators guarantee that validators follow the rules.

When a validator acts maliciously, both validators and their nominators lose a percentage of their staked DOT. This is known as slashing. Smart contracts embedded in the protocol handle this automatically.

Conclusively, before you begin, keep in mind that staking is only possible with certain cryptocurrencies that use the proof-of-stake (PoS) consensus process. This approach chooses transaction validators, people who voluntarily help add new data to the blockchain based on the number of bitcoin they have locked up rather than the number of mining rigs they own (known as proof-of-work, which is used by the likes of Bitcoin, Litecoin and Dogecoin).

When compared to proof-of-work-based assets, the proof-of-stake technique offers faster transaction rates and is easier to use. It also has a far smaller environmental impact, which is becoming increasingly desirable as countries around the world address climate change.